the city of man

Architecture for a World Utopia 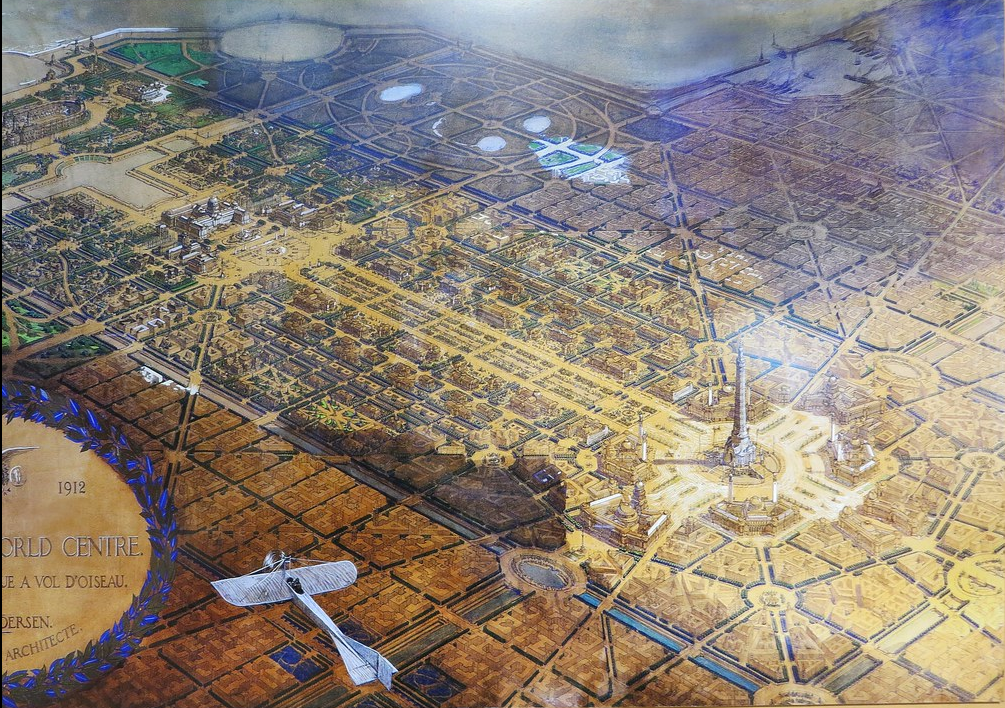 Symbolically, the spirit of the city rests in our collective strength, power, and security; it is the place where we live-out dreams of unity, an attempt to create an artificial Eden. This was the heartbeat of a strange proposal drafted in 1912 and circulated the following year – an international city meant to celebrate humanity’s upward evolution.

This article was first published in 2007, and then re-released with added details. Elements of this article also found its way into my book, Game of Gods: The Temple of Man in the Age of Re-Enchantment. In chapter 10, titled “Building Cosmopolis,” the concept of the world city emerges as a powerful and potent expression of Man’s collective vision.

Cities have always been viewed as civilization’s crowning achievement; the blended housing and interaction of culture, religion, science, commerce, innovation, and government – all solidified in architecture and design. 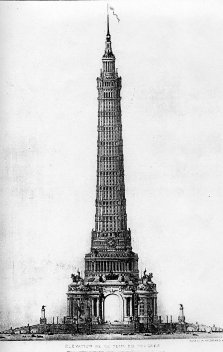 In 1913, the year before World War I erupted, an unusual publication circulated to government leaders and prominent individuals. Titled World-Conscience: An International Society for the Creation of a World-Centre and penned by Hendrik C. Andersen – an American sculptor of Norse descent living in Rome – this strange document detailed the plans for a global city; an urban jewel designed to elevate international human advancement.

Just under 50 pages in length, and illustrated with numerous drawings – including city plans, a “Tower of Progress,” and other architectural structures – Andersen mapped out potential locations for this international city-tower complex, and pitched the idea to respective governments and people of influence.

– In the Municipality of Tervueren, near Brussels, Belgium.

– At the north-west end of Lake Neuchatel in Switzerland (where the Witzwil farm-prison stands).

– Just south of The Hague in Holland (Netherlands), right on top of what is now the Bloemenbuurt West development in Segbroek.

– Northwest of Paris, in the district between the Oise River and what is now the A15 and D392 interchange at Herblay.

– At Frejus on the French Riviera, where the Argens River empties into the Mediterranean.

– Near Istanbul (Constantinople), beside the community of Yesilkoy (San Stefano). Today, the Ataturk International Airport sits directly on the ground Mr. Andersen believed to be an excellent location for his “International City.”

– To the west of Rome, against the Tyrrhenian Sea, exactly where the Leonardo da Vinci-Fiumicino Airport sits today.

– On the New Jersey coast, taking up most of Brick Township and the eastern half of Lakewood.

Wherever it was to be ultimately situated, the “International World Centre” would be a showcase of Mankind’s unity and progress. It would host a World Reference Library, an International Bank, an International Hall of Justice, various International Scientific Congress buildings, and a Temple of Religion – all surrounding a 320 meter (1049 feet) Tower of Progress.

What is particularly interesting is the philosophical basis for the project. This “International World Capital” was to be a unifying concept, bringing the world together in a new age of international peace and harmony. According to the document, “it would encourage the desire, ever increasing in the world, for unification, and it would give a strong impetus to the progress of religion, science and justice.” And religion, of all the foundational components, was a major factor in this grand scheme.

In developing his argument for a world capital, Andersen traced the history of civilization and religious thought, culminating with Christ and Christianity. However, the depiction of Christ presented by Andersen doesn’t line up with the Jesus of the Bible. In John 14:6 we find Jesus making an exclusive statement, “I am the way and the truth and the life. No one comes to the Father except through me” (Acts 4:8-12 and Acts 10:39-43 likewise attests to Jesus’ exclusive divine nature). However, Andersen’s focus on man’s divinity as the Christ-point for this city project runs counter to the Biblical account,

– “He [Jesus] taught men that the kingdom of heaven is within, and that, through love and devotion, through labour and justice, this invisible kingdom would grow strong and imperishable.”[1]

– “…the definition, clearly outlined by Christ, of God in man, can never pass away.”[2]

– “…as we are assured of the divinity of the human soul, we can survey the past with calm and serene judgment, and endeavour to strengthen the future by a deeper comprehension of the God in man and so help through unity, strength and culture, to build the ladder, as in Jacob’s dream, that reaches from earth to heaven.”[3]

Today we would say that Mr. Andersen’s religious positions would be more at home with the esoteric side of spirituality, for he spoke of a New Age-style harmonization of human souls “blending humanity into one complete unity of purpose.” This, he explained, would be “Humanity rising in majestic dignity from earth toward heaven… [in] humble devotion to its Creator – the embodiment of the universal soul mounting in appealing harmony towards the divine source of life.” (p.15)

Andersen’s proposal for a world center of unity wasn’t new in 1913, nor has the notion of world spiritual cities dissipated. The idea of creating a spiritual/unifying world-city under the banner of Humanity’s Ascension has been scattered throughout the pages of religious and esoteric texts, and it is still observable in our modern age.

Atlantis, the mythical land described by Plato, was said to contain a great Royal City (known as the City of the Golden Gates), and over the years esoteric scholars have propagated that this city was a global-spiritual center.[4] More recently, Benjamin Crème, the spokesperson for the channeled messages of Maitreya the Christ, (a supposedly ascended spirit master guiding man’s evolution) lists New York, London, Geneva, Darjeeling, and Tokyo as the five main city-centers of cosmic energy on Earth, with Rome and Moscow acting in an important but less direct capacity.[5]

In a similar vein, an interesting article on the spiritual symbolism of cities can be found posted at the Theosophical Trust web portal. In this piece titled “The City,” the writer reviews the historical significance of various religiously oriented cities, including Hindu (the Golden City), Buddhist (Kapilavastu), Judaic (Jerusalem), and Roman and Grecian centers. After citing numerous examples, the author concludes by saying, “We can recognize the sacred design nurtured in the united mind of the Builders and, once again, lay down a plan for the City of Man.”[6]

Professor Warren Wagar, in his 1963 book titled The City of Man (published by Houghton Mifflin Company), puts it this way: “The world-city is the inevitably large spiritual and intellectual and administrative capital of a civilization, of the whole known civilized world. Or, more broadly, it is the quintessence of a civilization, the gathering of all its vital human resources into a living organic unity… (p.15)”

On page 167, Wagar lays out the formula; “The coming world civilization will have a single, all-embracing religion, just as it will need a federal world government and an integrated world economy.”

While Hendrik C. Andersen has been relegated to the dustbin of obscurity, his conviction to create a world capital flows from a long history of humanity’s attempt at self-enthronement. Today, the idea of aggrandizement still percolates. The City of Man still captures imaginations and feeds desires, and for those willing to study and observe, we can see the City of Man being built – brick by brick – in the fields of science and technology, global governance, world religions, and the international banking community. All of the above can be considered part of the Babel syndrome, represented in the collective “First City of Man.”

In Genesis 11 we find the fascinating account of the Tower of Babel, and although it’s not the first city mentioned in the Bible, it is ground zero for a building project whose core element is power in unity. Here, in the Genesis account, the people are united in a common cause, one that sought to elevate the status of humanity through the works of their hands. But in reading the narrative, we have to note that it wasn’t just about the tower. Rather, the tower was but one element – albeit the most recognized – in what was a city-tower complex meant to demonstrate human pride, collective security, and world status. Mankind’s power-in-unity would be on display, and implied was the idea that “we’re are own God,” for we have taken charge of our own destiny. And all of this was wrapped up in an architectural synthesis.

As professor Yehezkel Kaufmann noted in his book, The Religion of Israel, the Tower of Babel was an attempt “to storm heaven; to be ‘like God,’ to rule the world.” (p.294). It was an edifice and a system – a technique – one that sought to demonstrate our own power through our collective action. Therefore, the City-Tower of Babel was not just an “event,” it was a foreshadowing and a meme, carrying with it the pulse of Mankind’s unifying desire and rebellion – a theme repeated and asserted throughout history, and ingrained in the fabric of our modern era.

And as God judged the people who built the Tower of Babel, and thus doomed the project to failure, so too God judges the final Babel – the City of Man.