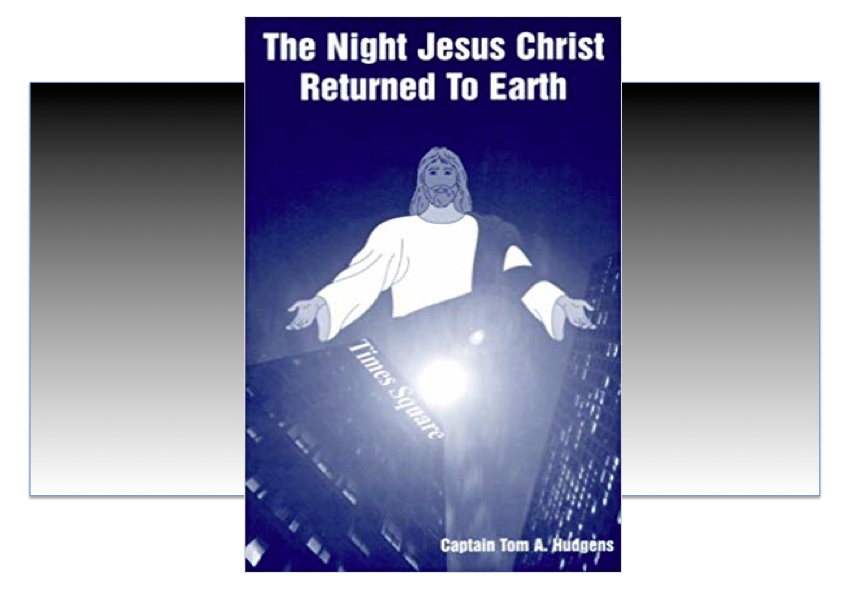 Right before the Millennium turn over, I came across a strange little book asking the question, what would Jesus do? This Jesus, it turned out, was on a mission to help the world save itself through the evolutionary power of human unity.

Allow me to introduce to you the new Jesus. This isn’t the Jesus Christ known to us from the pages of the Holy Bible, rather, this Jesus is a new version cast into the arena of international politics, global social change, and evolutionary spirituality.

Wondering what I’m talking about?

While at a conference on world order in the fall of 1999, I picked up a little book titled The Night Jesus Christ Returned To Earth, authored by Captain Tom A. Hudgens. At the time, Hudgens was President of the Association to Unite the Democracies – an organization dedicated to the advancement of world government – so his views carried a progressive, internationalist flavor. So did the Jesus character in his book.

In his Foreword, Hudgens writes, “In this book I have intentionally put words into Jesus’ mouth. Whether the words came directly to me from Him or that the words are my own invention is debatable”[1]. How convenient.

As a work of fiction, the author portrays Jesus Christ as returning to Earth during the Millennium Celebrations at Times Square in New York City. The year, 1999, is only seconds away from closing and a new millennium is dawning,

“At the very moment that the white ball should start its descent, a loud explosion scatters the ball into a million pieces of confetti. In its place is Jesus Christ, descending and arriving at the bottom for his triumphal return to Earth, not as described in the Book of Revelation, but as He Himself had decided to make His entrance.”[3]

At this point in the book, Jesus explains why he appeared first in the United States, and New York City more specifically:

Jesus then asks “all citizens of the world to elect ten disciples for me…”[5]. All of this is rather novel, especially given the fact that the Jesus of the Bible always invited His disciples to follow Him; it was not a matter of global democracy, but of invitation and personal calling.

Hudgens then describes what his version of Jesus “would endorse today.”

Although the Association to Unite the Democracies has been influential in the World Federalist community, Hudgen’s name and organization are practically unknown by the general public. And his book was an obscure publication by any standard.

So why bother introducing this little known text and its concepts? Because his ideas represent a very specific line of thinking found within sections of the international community: the blending of a mystically oriented Christ-figure with the heady vision of global order.

Former United Nations official, Robert Muller, likewise preached a new global order incorporating a politically progressive New Age Jesus. In his 1982 book, New Genesis: Shaping a Global Spirituality, Muller wrote, “If Christ came back to earth, his first visit would be to the United Nations to see if his dream of human oneness and brotherhood had come true”[13].

In a section of New Genesis  titled “The Reappearance of Christ” – a transcript of a speech given at the Arcane School Conference, an esoteric body connected to Lucis Trust and the occult philosophies of Alice Bailey– Muller spells out his vision of Christ,

“So everywhere I look – and I am not a theologian or a philosopher, I am just a United Nations official trying to make a little sense out of all this – everywhere I see the Christ’s luminous messages. They are all still among us, they are coming again to the fore ever more potently. In the present global world they have to express themselves in the ecumenism of religions. The world’s major religions in the end all want the same thing, even though they were born in different places and circumstances on this planet. What the world needs today is a convergence of the different religions in the search for and definition of the cosmic or divine laws which out to regulate our behavior on this planet. World-wide spiritual ecumenism, expressed in new forms of religious cooperation and institutions, would probably be closest to the heart of the resurrected Christ. I would wholeheartedly support the creation of an institutional arrangement in the UN or in UNESCO for a dialogue and cooperation between religions. There is a famous painting and poster which shows Christ knocking at the tall United Nations building, wanting to enter it. I often visualize in my mind another even more accurate painting: that of a United Nations which would be the body of Christ.”[14]

Muller’s perspective didn’t emerge from his own sense of spiritual understanding; it was the result of other peoples work, including the mystic Pierre Teilhard de Chardin[15] and Theosophist Alice Bailey, whose writings have influenced the Robert Muller School program[16].

Chardin, a controversial Catholic theologian, advocated the complete unification of mankind, including,

“…everything suggests that at the present time we are entering a peculiarly critical phase of super-humanisation. This is what I hope to persuade you of by drawing your attention to an altogether extraordinary and highly suggestive condition of the world round us, one which we all see and are subject to, but without paying attention to it, or at lease without understanding it: I mean the increasingly rapid growth in the human world of the forces of collectivisation.

The phenomenon calls for no detailed description. It takes the form of the all- encompassing ascent of the masses; the constant tightening of economic bonds; the spread of financial and intellectual associations; the totalisation of political regimes; the closer physical contact of individuals as well as nations; the increasing impossibility of being or acting or thinking alone…”[20].

Placing the capstone on all of this is the ongoing and incomplete work of the New Age Christ,

“And since Christ was born, and ceased to grow, and died, everything has continued in motion because he has not yet attained the fullness of his form. He has not gathered about Him the last folds of the garment of flesh and love woven for him by his faithful. The mystical Christ has not reached the peak of his growth… and it is the continuation of this engendering that there lies the ultimate driving force behind all created activity… Christ is the term of even the natural evolution of living beings.”[23]

Similar to Chardin, Alice Bailey – founder of Lucifer Publishing Company, which later morphed into Lucis Trust – taught that a transformed world was close at hand. Like Chardin’s “new spirit for a new order,” Bailey wrote, “Some day the minds of men – illuminated by the light of the soul – will formulate the one universal religion, recognizable by all”[24].

Expanding this spiritual collective-philosophy further, Bailey believed that the New Age Christ will manifest himself physically, directing his will into the arena of world politics, economics, and religion[25]. Even now, Bailey explained, the apparent contradiction of national and international conflict is geared towards this singular purpose – a “climax,” a “point of tension” that “will eventually prove to be the agent that will bring about a point of emergence”[26].

Muller, Chardin, Bailey… each of these visionaries, and scores more, call for a restructured international political system, a new global economy, and a planetary transformation of social and ethical thought – ultimately brought about by a New Age Messiah. Which brings us full circle, coming face-to-face with Hudgens’ “Millennium Jesus” and the challenge: What would Jesus endorse today?

Actually, this isn’t too hard to figure out. Hebrews 13:8 tells us that “Jesus Christ is the same yesterday, today, and forever.” Knowing this, it’s fairly easy to discern what Jesus Christ would endorse today; it’s the same thing He endorsed 2000 years ago – an exclusive way to the Father (John 14:6), and that man is in need of a Savior because man is a sinful creature (John 3:16-21).

But the above reality of the Biblical Jesus, as opposed to Hudgens’ “world savior,” doesn’t bode well in today’s climate of tolerance and political correctness. Instead, a New Age Messiah is desired and anticipated, one willing to embrace all religions and unite all nations.